Our Club's got an Apoc' game coming up on the 5th of February, for which I'm writing a scenario and narrative for. The battle will be centred around 'Martyrs Square' , but i quickly realised that i didn't have a suitable terrain centrepiece for it! So i threw this together on Monday!﻿ 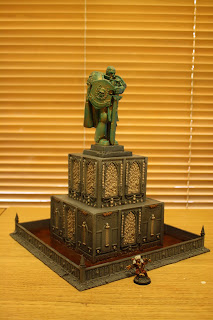 GW building panels with plasticard tops to each tier with the gaps all sealed with Polyfilla. Very quick, very easy!

The 'water' at the base of the monument is just Bestial Brown sealed with Army Painters Quickshade Strong Tone Varnish to make it look watery. It used to be a mosaic covered pond, but after many months of neglect, has become a mucky, rain water filled puddle. 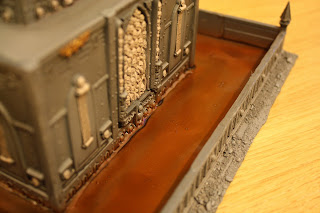 The Space Marine statue is of course from the Honoured Imperium set. Basecoated in shining gold, it was given a heavy drybrush of 1:1 Goblin Green:Ice Blue. 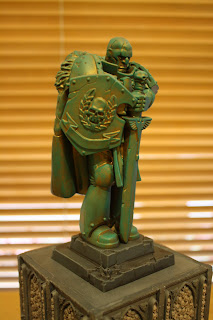 I've left the Statue detachable from the monument for storage purposes, and so it can eventually be part of a 'Battlefield in a Box' project later on!

I'm looking forward to seeing this on the table for the Apoc' game. Stay tuned for pictures of that in the next 2 weeks!

Email ThisBlogThis!Share to TwitterShare to FacebookShare to Pinterest
Labels: Terrain